The joy of Virtual Sports during the Pandemic

Over 400 children and young people with intellectual disabilities were able to benefit from the digital solution for Virtual Sports Fitness implemented with funding from the Globalworth Foundation. A total of 150 of them competed in the two Special Olympics Romania competitions.

At times when face-to-face interaction was limited due to the pandemic, “The Fitness and Smiles Championship” brought joy, friendship, sports, and technology. It was the binder that gathered children from six residential and placement centers in front of the screen to exercise.

Between March 2020 and March 2021, with the help of technology provided by the Globalworth Foundation, which financed the ”Fitness and Smiles Championship” project, young teens from the Centers participated in fitness exercises, online competitions, learned to make correct movements and interacted remotely with both the virtual coach and other children from other placement and residential centers.

”I really enjoyed the exercises, they helped me learn that sport is both healthy and beneficial for the body. I liked this system and I worked out both outside and in the gym. I finished second in December, but I wasn’t disappointed because I enjoyed competing.” said Valentin S. from the Multifunctional Services Center for the Child in Difficulty, Gura Humorului, Suceava County.

The Globalworth Foundation sponsored the Special Olympics Romania Foundation with 35,000 euros for the first digital solution that enabled children and young people with physical and intellectual disabilities to participate in distance sports in placement and residential centers.

“The project was well-received, and at a time when we didn’t have much activity due to the Pandemic, it was a lifeline for us and the children at the center. The children were ecstatic about the activities that Special Olympics proposed to us, especially the fact that they are good for them. The online and offline activities at the end of the two championships, when we met with Special Olympics Romania members, were very well received, and we even wondered how this activity would be continued. It was interesting and interactive to see Andrei (#FitnessGuru) on the screen and then do the exercises and get to know you online as friends of the center. Thank you for the proposal to be a part of the project” said Irina Baltatescu, director of the Scholar Center of Inclusive Education “Alexandru Rosca”, Piatra Neamt, Neamt County.

Matei, the most exuberant kid from the “Alexandru Rosca” Center, enjoys any activity that involves movement and interaction with colleagues.

” I was overjoyed to complete these exercises and see Andrei. Sports and running are two of my favorite things to do. It was comfortable for me, and I always completed all of the exercises. I never missed it. I won the Fitness and Smiles Championship both now and in the winter, and I enjoy receiving a medal and gifts. Invite me again, because I’ll be back” the 11-year-old student says.”

Filip C., the 19-year-old from the Multifunctional Services Center for the Child in Difficulty, Gura Humorului also had the opportunity to have an artistic performance, at both the award ceremonies of the Fitness and Smiles Championships. Passionate about music, he told us that he enjoyed participating and doing sports.

“I also enjoyed the award ceremonies because you came to us and I could always prepare a song because I enjoy singing.” I sang “We Are Romanians” on December 3rd, and now I’m working on an Easter song.”

Maria Ulici, director of the Multifunctional Services Center for the Child in Difficulty, Gura Humorului, Suceava County also told us about the direct benefits of this project.

“We were delighted to be a part of this project, in which our center beneficiaries took part in fitness training coordinated by physiotherapists Lucian Iordache and Daniel Coroi. Because our center lacked such a system, the technology that enabled the training will be useful in the future. This enabled our young people to participate in online fitness classes via the electronic system. Other sports equipment and accessories we received will be useful as well because we will be able to train with them. With the help of this sports project, our beneficiaries began to participate in more sports activities. We hope that many sports projects will be organized, with as many people as possible benefiting from the protection system.”

“I have been doing sports for as long as I know, I play women’s rugby in Iasi for the women’s team, and men’s team here in Gura Humorului, but this was an opportunity for me to help my colleagues from the center, and to show them how good you feel when you do sports. I have been at the center for a year and 8 months and I gladly participate in all the activities here. I am a student at the Teodor Balan Secondary School but I live in one of the houses in the center. I took first place in the Fitness and Smiles competition and now in the Championship from December.”

“I really love doing sports, I got attached really fast to sports because I like to exercise. I enjoyed every exercise Andrei suggested, but if I had to pick the most difficult, I think it would be the stepper.

“I like training with my colleagues and with Mrs. Coca, a really nice lady. The most enjoyable exercise for me was the one involving a ball. Sporting while watching the exercises on the screen was fun for me. I was glad to be a part of it.”

“In terms of our relationship with Special Olympics, the Pandemic came and went because the organization provided us with the opportunity to participate in online activities. It was extraordinary for them (the athletes) to have a celebration on December 3rd, the International Day of People with Disabilities, because they hadn’t had one in a long time. This award ceremony fit them perfectly, especially since they received a gift as well. We also sang carols, and the Fitness and Smiles Championship stepped in to help. Those who were initially apprehensive want to participate now that they understand what is going on. I want to see each other as much as possible at Special Olympics competitions.”

“The digital assembly we received was absolutely necessary. We didn’t have anything comparable.“

“The equipment provided was extremely beneficial, as the children were able to view the exercises much better with the connection to a TV. And the audio system came in handy because there were a few young people who couldn’t hear. We are delighted that our students will be able to benefit from the equipment that we have received.” 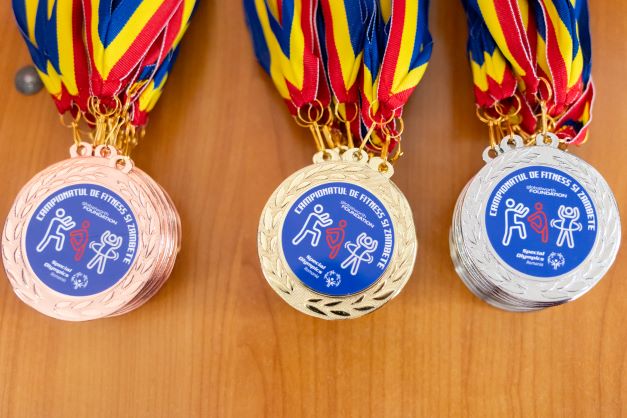 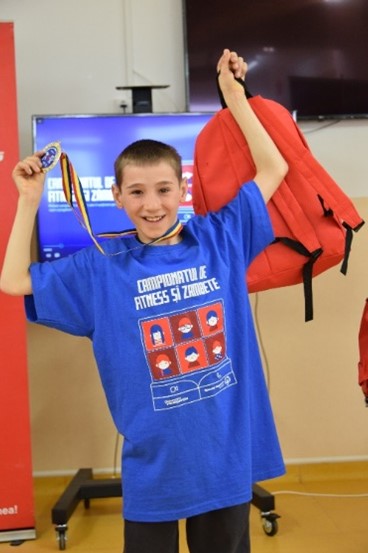 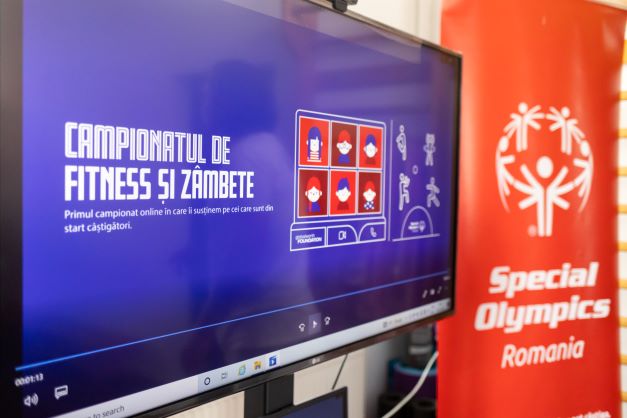 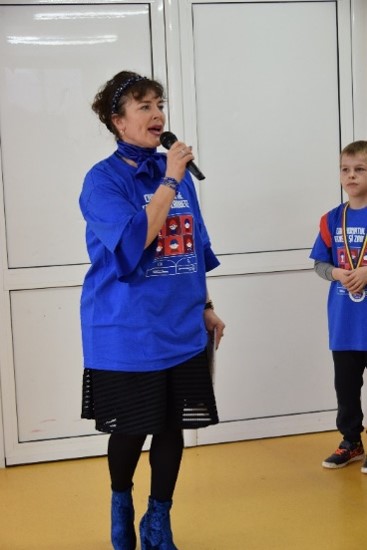 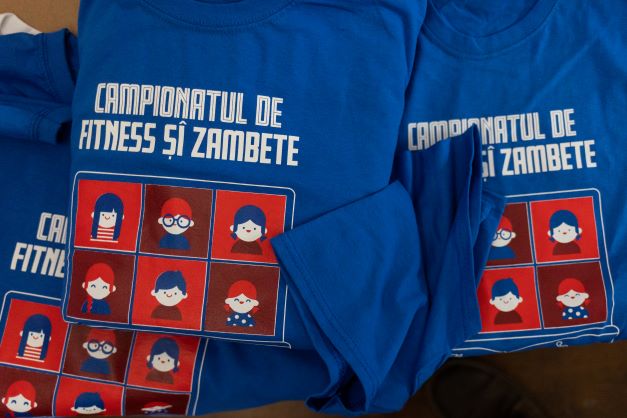 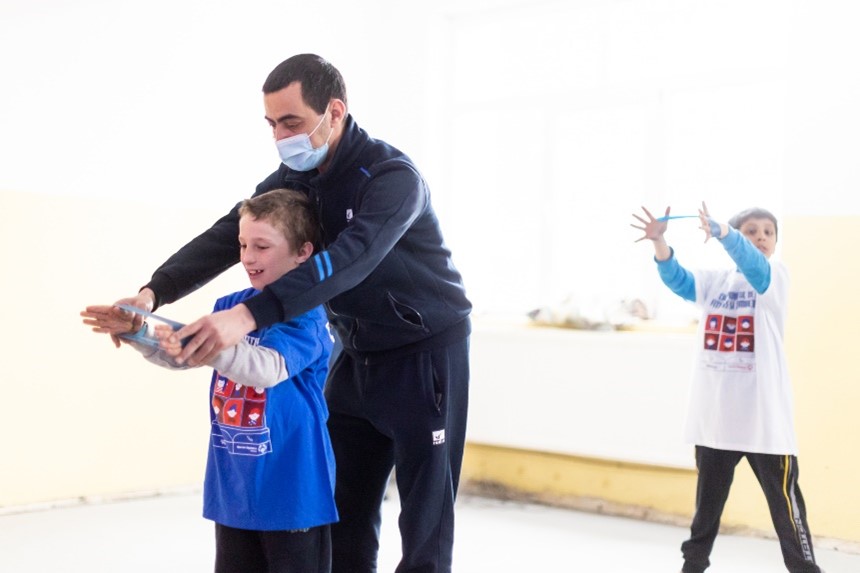 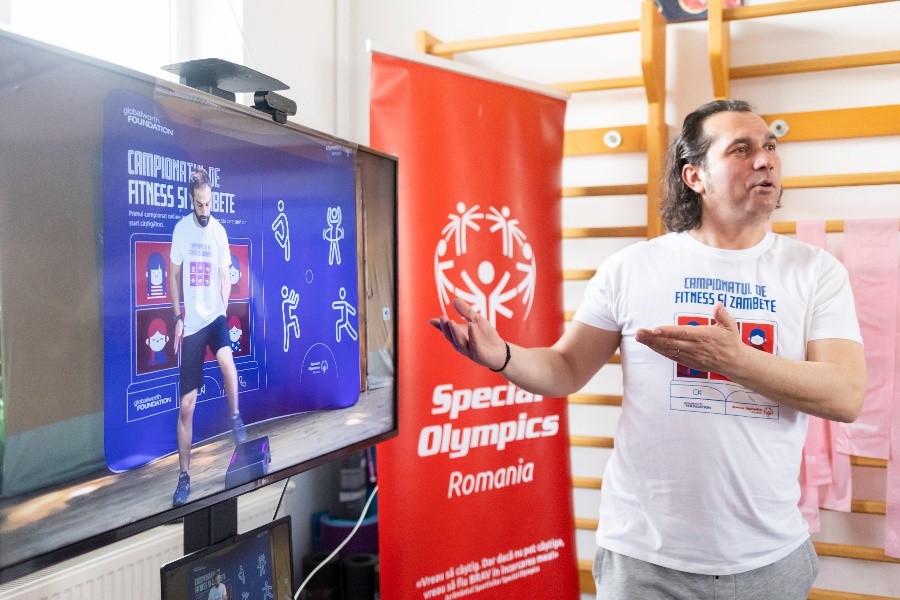 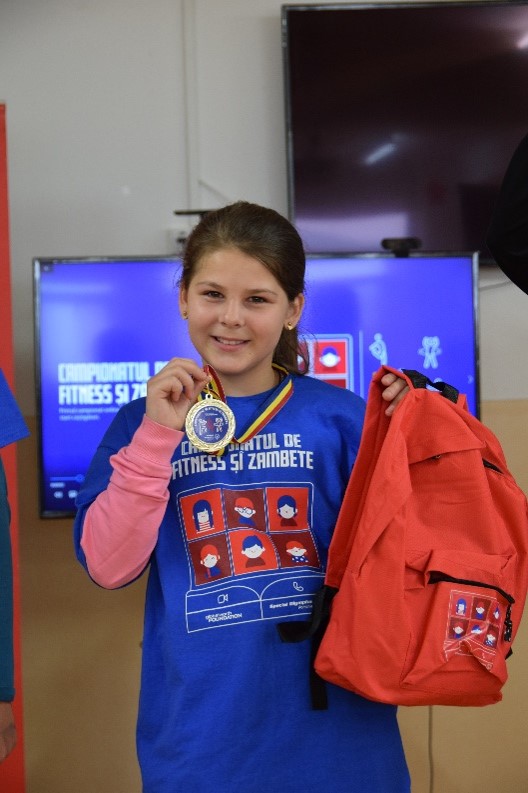 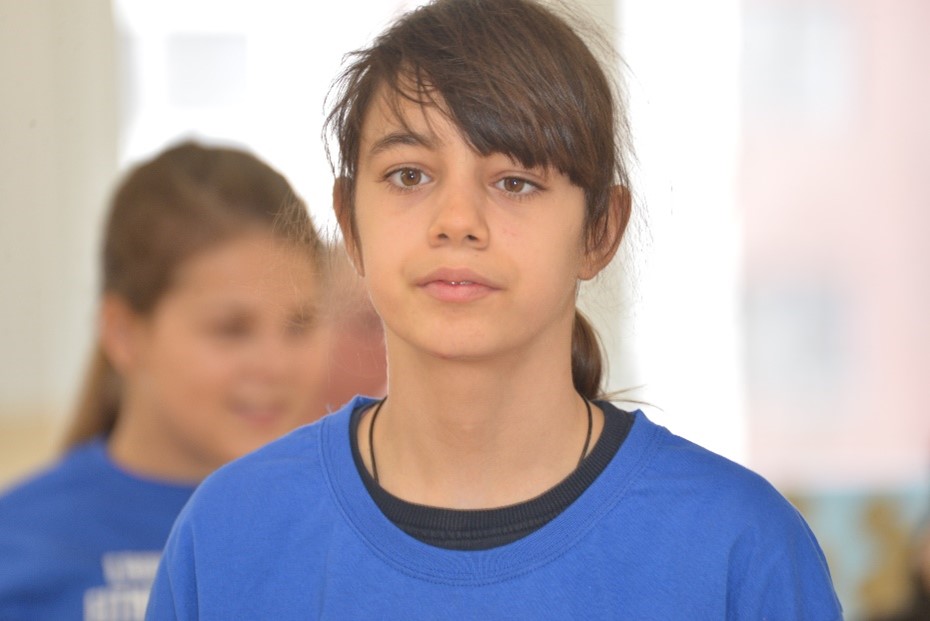 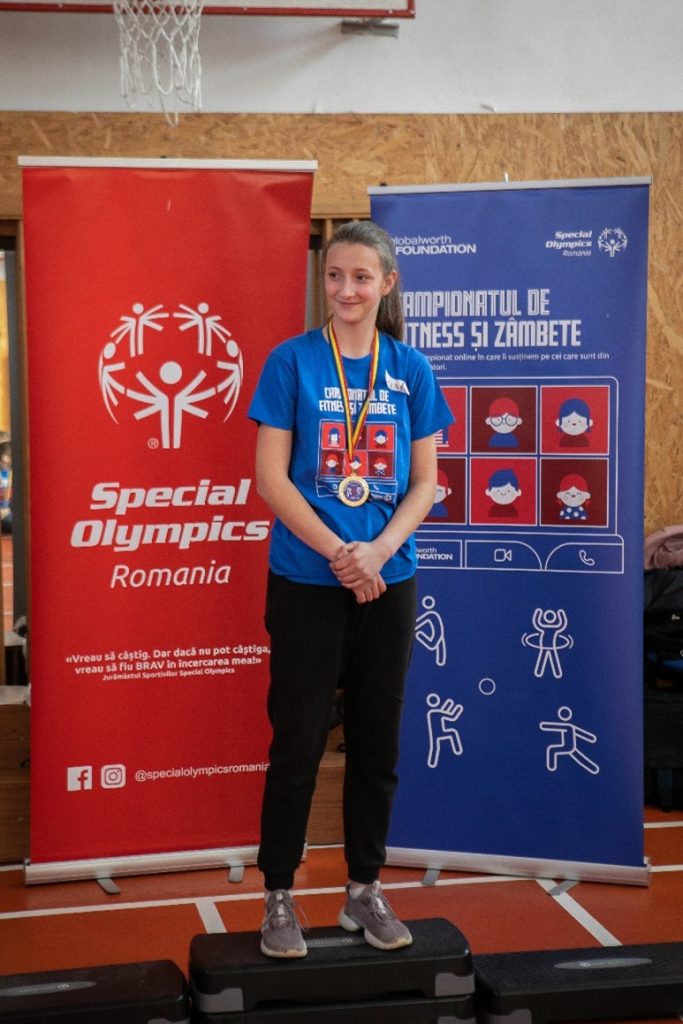 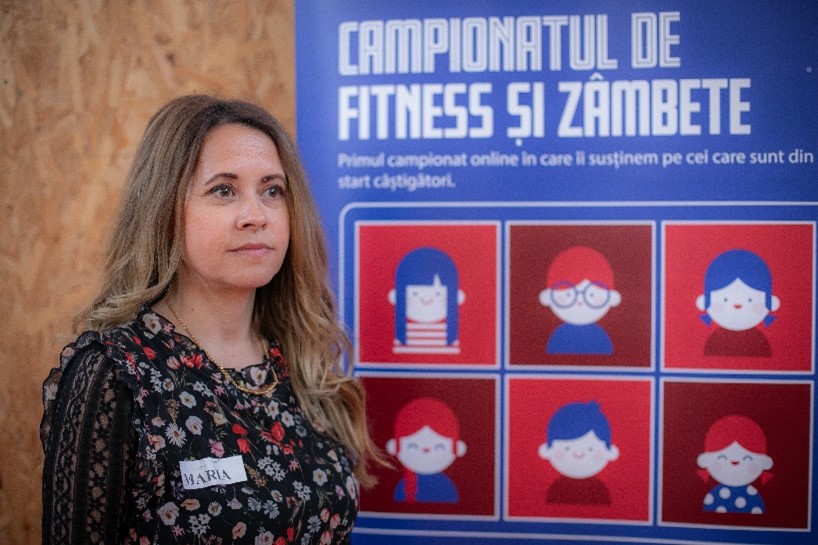 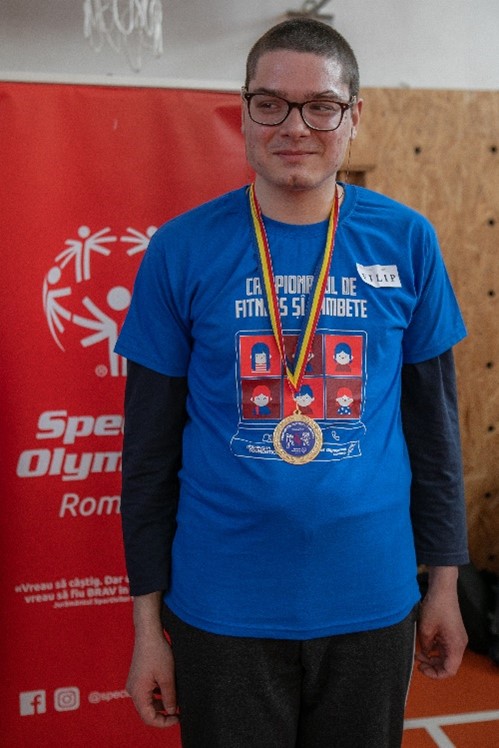