Globalworth Foundation and Igloo – Habitat and Architecture Association announce the awards ceremony of the international idea competition “2031 NOW_our cities in 10 years” dedicated to students in architecture, city planning and design from Poland and Romania, and launched in November 2021. The event will take place on Friday, November 4th, 2022, between 10.30 a.m. and 12.30 p.m., at Hi-Tech Learning Center of the “Ion Mincu” University of Architecture and Urban Planning Bucharest. Prizes worth €8,000 and the competition trophy will be awarded to the winning participants. The trophy, a 3D-printed sculpture designed by idz architecture, represents a subtle projection of a future city.

The event will also mark the launch of the catalog, in which the projects CK0000_Carthage – Eduard Untaru (1st Prize) and AN1153_A/Spire – Andrei Nițu Săraru (2nd Prize) are extensively presented, alongside the other finalist projects. The catalog also includes essays by Helle Søholt, Krzysztof Ingarden and Jakub Szczęsny, thus becoming a valuable educational and research tool for students and professors, beyond the context of this competition.

At this event will participate the organizers of “2031 NOW_our cities in 10 years”, members of Globalworth Foundation and Igloo – Habitat and Architecture Association, the winners of the competition, as well as the jury members. Also, there will be present reprezentatives of the management and professors of UAUIM and students in architecture and urban planning.

“2031 NOW_our cities in 10 years has been” the competition through which we make steps towards fulfilling the commitment to build functional, sustainable and harmonious buildings with respect to the environment and the community. The applications submitted in the first edition of the competition triggered our imagination and definitely contributed to the establishment of the future of architecture. It was a great honour to evaluate the applications along with the prestigious jury members that we have managed to bring together. We have met very talented young architects with whom we hope to work in the near future”, stated Dimitris Pergamalis, MRICS Group, Head of Workplaces at Globalworth.

“The experience of 2031 NOW_our cities in 10 years, the competition we have had the privilege to run together with the Globalworth Foundation, offered aspiring architects, designers and urban planners an opportunity to imagine, design and strategize our shared environments, as well as the possibility to publicly showcase the visions that will shape our future cities. This kind of competition helps to expand the young and fresh minds that must keep on dreaming, while also working with solid matter, with constraints and, sometimes, with absurd regulations. I hope we can build on this initial success through a new creative and stimulating competition aimed at those who represent the future of architecture and, implicitly, the future of our cities.” – Arch. Bruno Andreșoiu, Igloo – Habitat and Architecture Association

The competition theme invited students to imagine a sustainable and coherent urban vision that could shape and improve the environment of our cities in the near future. This had to be illustrated for a generic piece of land of ​​2,031 ha by means of mixed-use buildings, community spaces, parks, infrastructure, all connected in a new design that could be built in 2031.

Please find details about the winning projects as well as the other nine short-listed entries at https://www.2031now.com/projects.

2031 NOW_our cities in 10 years is a competition powered by Globalworth Foundation and organized by Igloo – Habitat and Architecture Association. 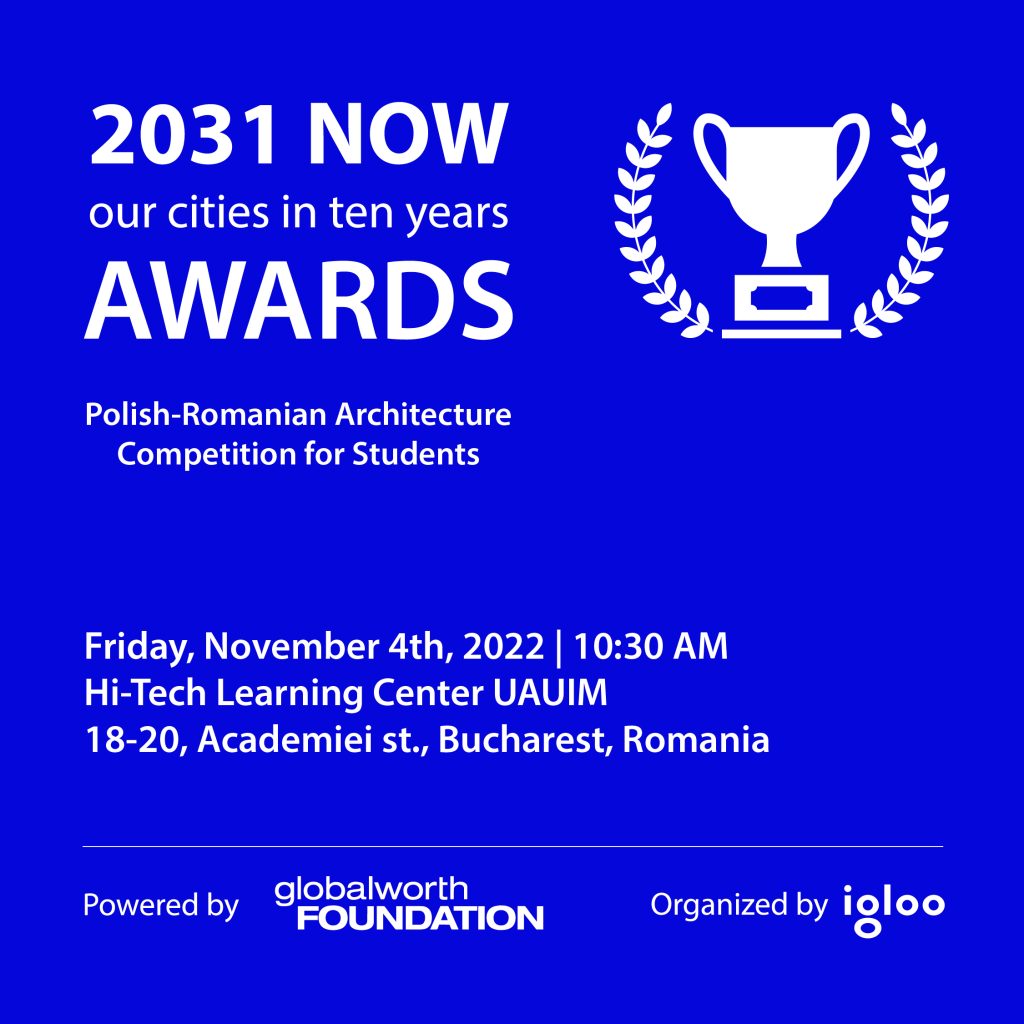 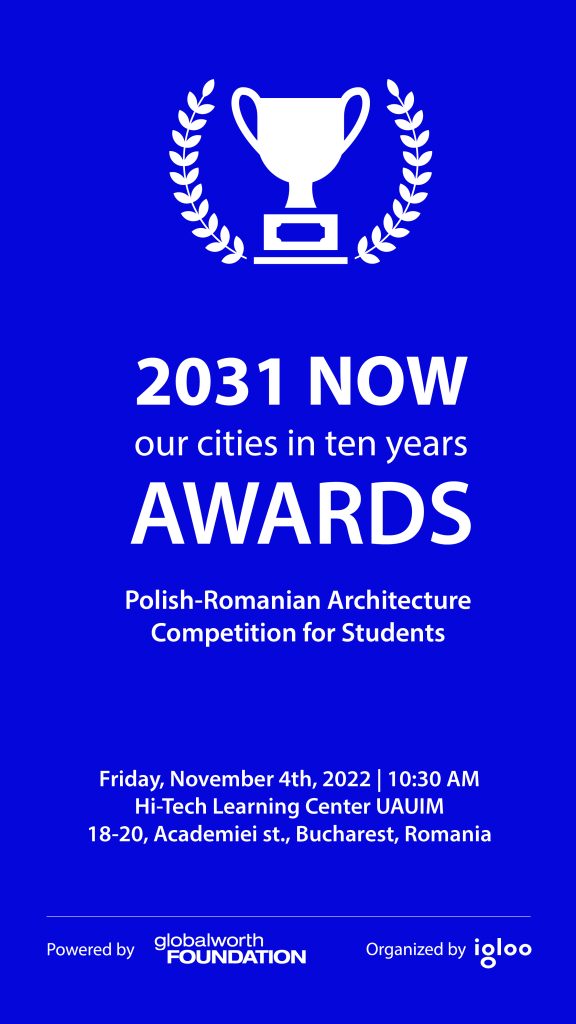 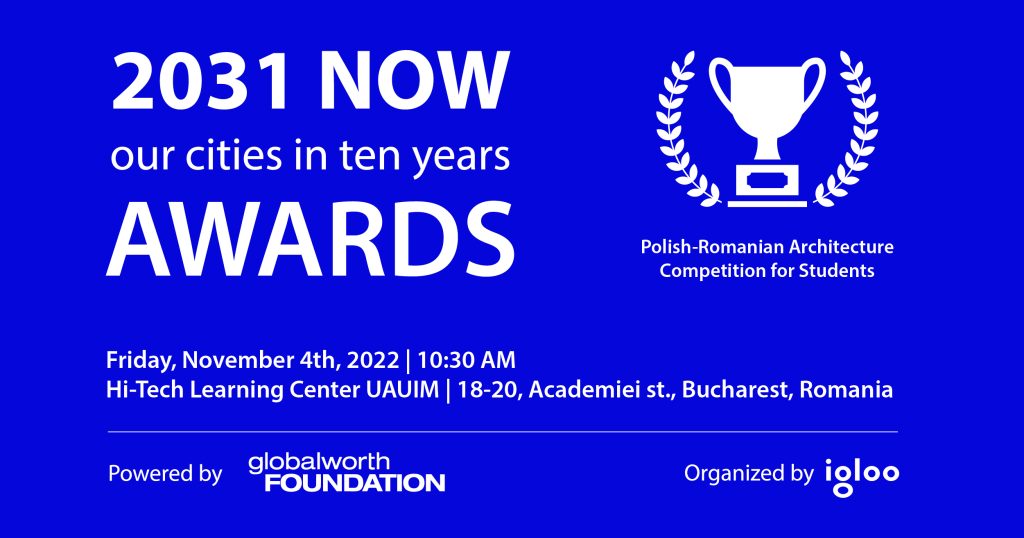 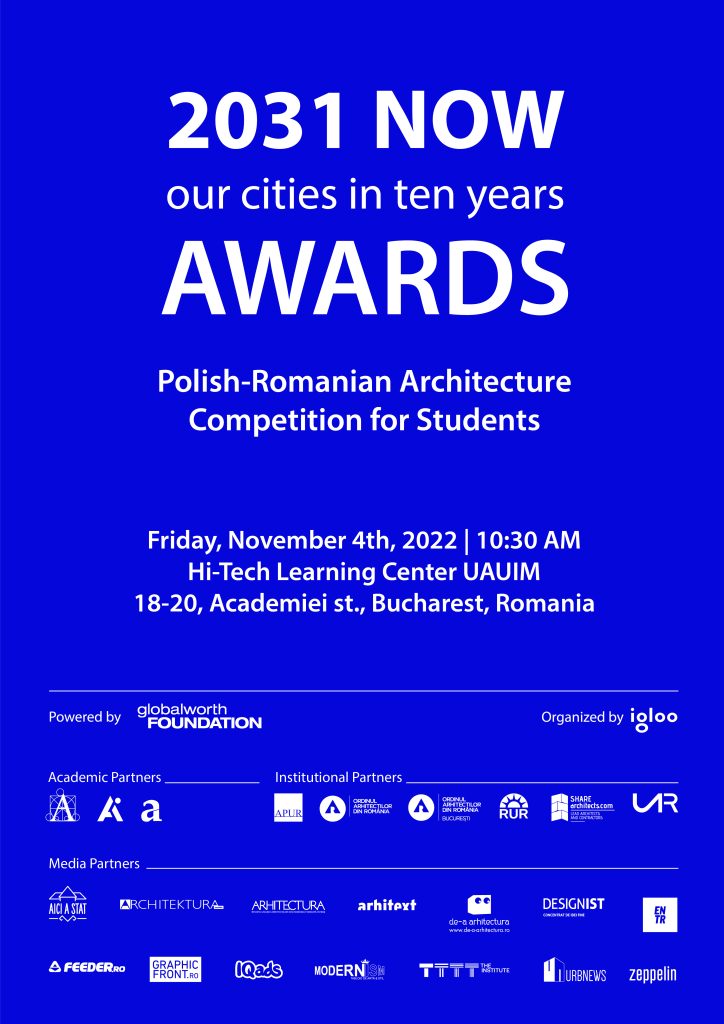